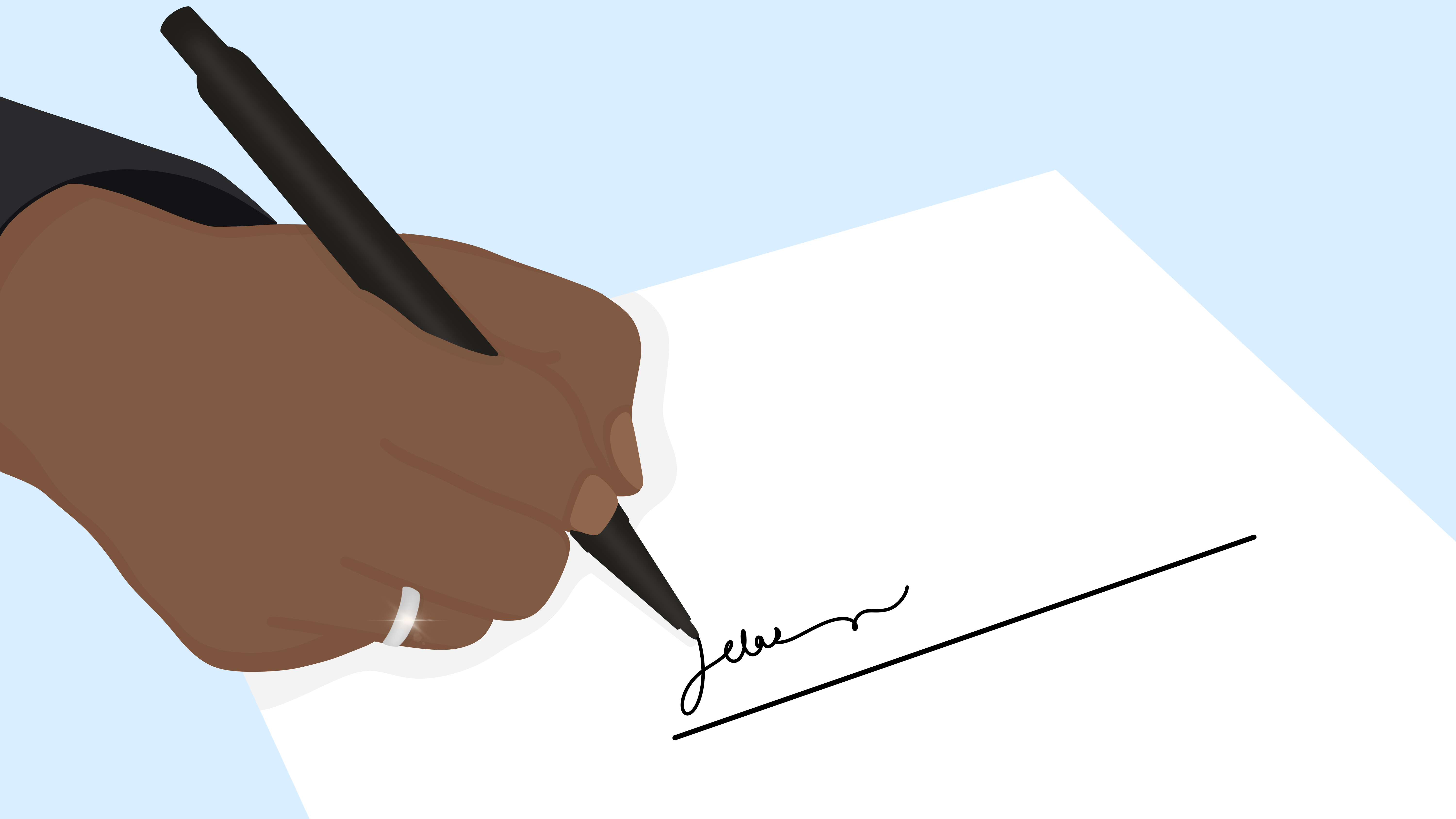 The idea of a prenuptial agreement is common enough that the process has acquired a ubiquitous nickname: a prenup. Less known, and not usually accompanied by a catchy nickname, is the postnuptial agreement.

Both are types of contracts that can help married couples in the financial planning process, and provide a level of stability against the uncertainty inherent in separation proceedings. But they differ in important ways, and the laws and processes surrounding their use vary considerably. This post provides an explanation of how prenuptial and postnuptial agreements differ, why these differences are important, and things to look for in setting them up.

Prenuptial agreements and postnuptial agreements are both contracts that let married couples establish certain kinds of property rights and obligations. Specifically, they let couples determine how marital property will be distributed should the marriage come to an end.

Although the agreements can apply in case of either divorce or the death of one spouse, it’s common for people to have other estate planning documents, like a will, in place to determine what will happen to their assets after their death. As a result, prenuptial agreements and postnuptial agreements are more commonly associated with their effect on divorce proceedings. Without a prenuptial or postnuptial agreement in place, state law determines how a couple’s property will be distributed if the marriage ends in divorce.

Nine states, most of them in the west, are “community property” states. In these states, all property acquired during marriage is presumed to be community property. This means that ownership of each asset will be divided in half at the time of divorce, and may require selling certain assets, like a house or a controlling share in a company, that are not easily divided.

In the United States, most states are known as “equitable distribution” states. In these states, the law recognizes that property acquired after marriage belongs to one spouse in particular, but it requires judges in divorce proceedings to divide a couple’s assets in a way that is “fair” to both parties. The law in most states includes a list of factors that judges in divorce proceedings are to rely on to determine what a fair distribution looks like. In some states, judges may transfer ownership of some separate property if it is difficult to equitably situate both spouses using only marital property.

Regardless of where a couple lives, got married, or acquired certain property, divorce proceedings can be fraught with uncertainty. Judges have significant discretion to divide assets in a way that one party may feel is unfair. However, if a couple has a prenuptial agreement or postnuptial agreement in place, the judge is generally required to defer to the agreement in distributing property. (There are some exceptions, discussed below.)

The key difference between these two documents is when they are entered into, and when they go into effect. Although the general direction in the law is to treat them the same and for them to face the same requirements, most states currently continue to treat them differently. 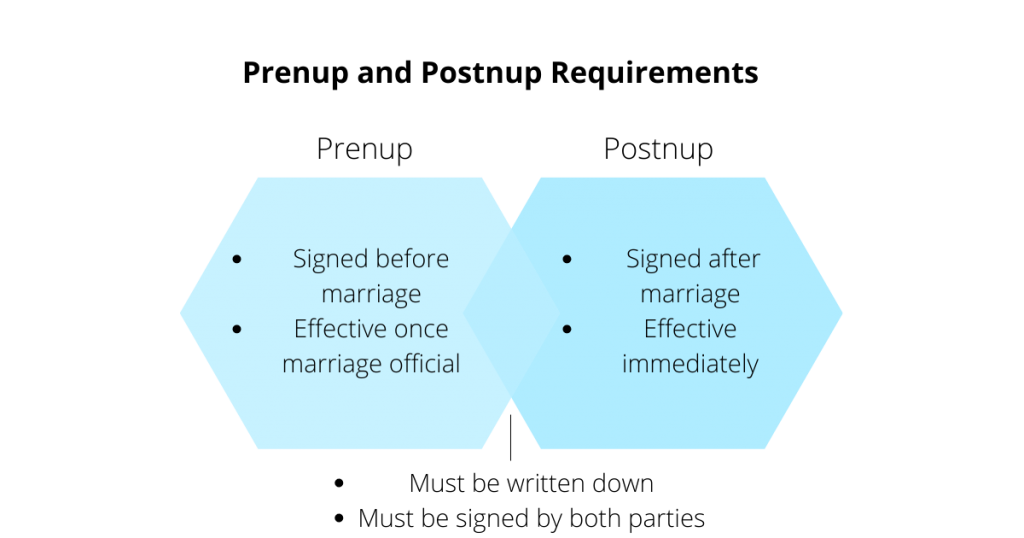 What is a prenuptial agreement?

Prenuptial agreements, often called “prenups” or “premarital agreements,” are entered into before a couple gets married, and become effective as soon as the couple is officially married. They must be written down and signed by both parties.

What is a postnuptial agreement?

Postnuptial agreements, sometimes called “marital agreements,” are entered into after a couple gets married, and generally become effective immediately. They must be written down and signed by both parties.

For decades, courts declined to enforce either prenuptial or postnuptial agreements. They viewed marriage as a status, not a contractual arrangement, and hence as something that could not be modified by contract. The agreements were thought to promote divorce, which was itself legally restricted.

As more states came to embrace the idea of no-fault divorce, in which neither spouse has to prove moral wrongdoing in order to file for divorce, the idea of making it easier to arrange how assets should be distributed ahead of a divorce also became more popular. Today, every state allows some kind of prenuptial agreement, and many have adopted some version of the Uniform Premarital and Marital Agreements Act.

The uniform act and many legal authorities argue for treating postnuptial agreements and prenuptial agreements the same, and some states, like Colorado, make no distinction. Nonetheless, most states tend to treat them very differently.

As stated earlier, when a couple gets divorced, the judge handling their case will generally defer to a written prenuptial agreement that is signed by both parties. However, either party may argue that the prenuptial agreement should not be enforced for one of the following reasons.

Duress, sometimes called undue influence, means that a party was pressured into signing a contract, and that the spouse ultimately did so against his or her will. Whether a future spouse signed an agreement under duress is a case-by-case determination, and also includes the amount of time that each person had to consider the agreement.

Often, duress means that a spouse had “no reasonable alternative” to signing the document. Some courts, for example, have found that one spouse threatening to cancel a wedding if the other does not sign the agreement does not constitute duress.

Unconscionability means that an agreement is grossly unfair to one party. A prenuptial agreement can either be unconscionable at the time it was signed, or it can become unconscionable if circumstances change during the marriage.

As with duress, the exact definition will vary from state to state, and parties are permitted to create premarital agreements that distribute assets unevenly. Some couples, for example, may choose to do this if one spouse is entering a marriage with far more assets than the other. Provisions regarding spousal support, sometimes called maintenance, are permitted in most states, but may face special scrutiny.

At a minimum, both parties must have the opportunity to consult with an attorney in reviewing prenuptial agreements. Although there is not a universal requirement for each party contracting their own attorney, some states require that a party waive the service of an attorney to review a prenup in writing.

In order for a prenuptial agreement to be enforceable, each party must have an adequate idea of what assets the other spouse has. The amount of information to be provided varies depending on the state.

Each partner should provide a “general approximation” of their income, assets and liabilities. Actively concealing information about one of these things is likely to render the agreement unenforceable. 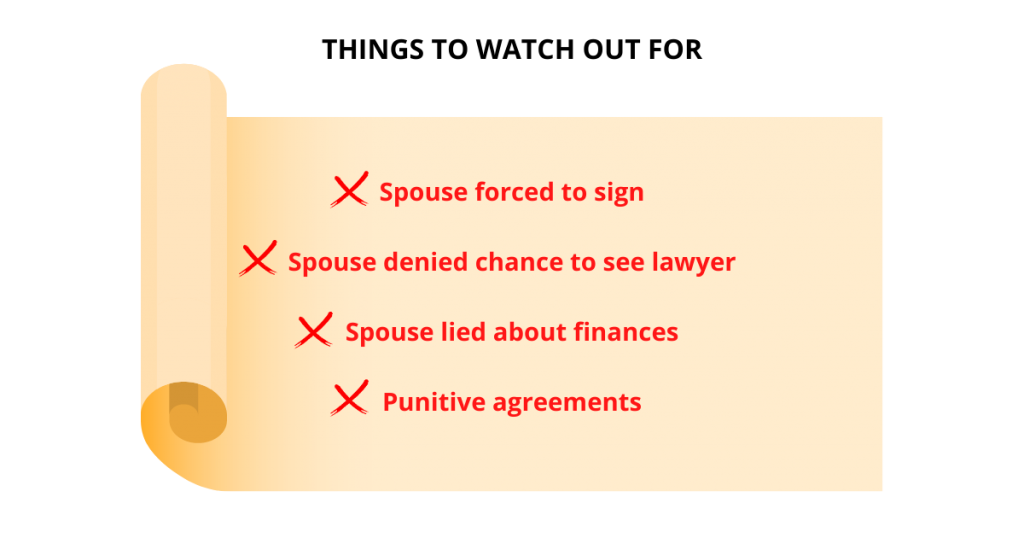 Determining whether a postnuptial agreement is enforceable becomes more complicated because some states introduce a third type of agreement: separation agreements, sometimes called marital settlement agreements. Separation agreements are those made in anticipation of divorce; in other words, they are an attempt to determine how property will be distributed when a couple is planning to get divorced, or a divorce is imminent.

Both prenuptial and postnuptial agreements should be the result of an extended discussion between spouses. In some relationships, even bringing up the topic can create acrimony.

Should I get a prenup?

Although commonly associated with the ultra-wealthy or those with significant imbalances in the assets each couple brings to a marriage, prenuptial agreements can be useful for many different kinds of couples.

Those who have previously been divorced, particularly those with children from a previous marriage, are more commonly involved in prenuptial agreements. This may be because they have seen the challenge of going through a divorce without one.

Prenups can also be useful for those whose assets include stock in a growing business. It’s possible that the spouse with a stake in a business may believe it is likely to grow significantly during the marriage, but fears that the increase in value will be considered marital property, rather than a reflection of latent value in the company.

Even if the business is a stable one, those with large stakes in a business might also consider prenuptial agreements. This is because a large ownership share of a business, particularly a controlling share, brings much more power than a smaller share, and is likely more than twice as valuable as a share half its size.

Should I get a postnup?

There are other situations, however, that may specifically make a postnuptial agreement desirable. Couples whose financial situation changes considerably during a marriage are the most obvious candidates. For example, although inheritances are usually considered separate property, it’s sometimes easy for them to become “comingled” with other assets, and without an agreement of some kind they can become subject to division rules in a divorce proceeding.

One thing to watch out for: Couples sometimes use a postnuptial agreement as a way to try to save a troubled marriage. There are numerous cases in which one spouse commits infidelity, and then agrees in a postnuptial agreement to take a reduced share of assets in the event of divorce, in return for the other spouse being willing to overlook the infidelity and remain married. While not expressly prohibited, these sorts of arrangements risk being viewed as a “punishment,” and may later be deemed unenforceable by a court.