Lacking a Lease: Understanding the Tenancy-at-Will 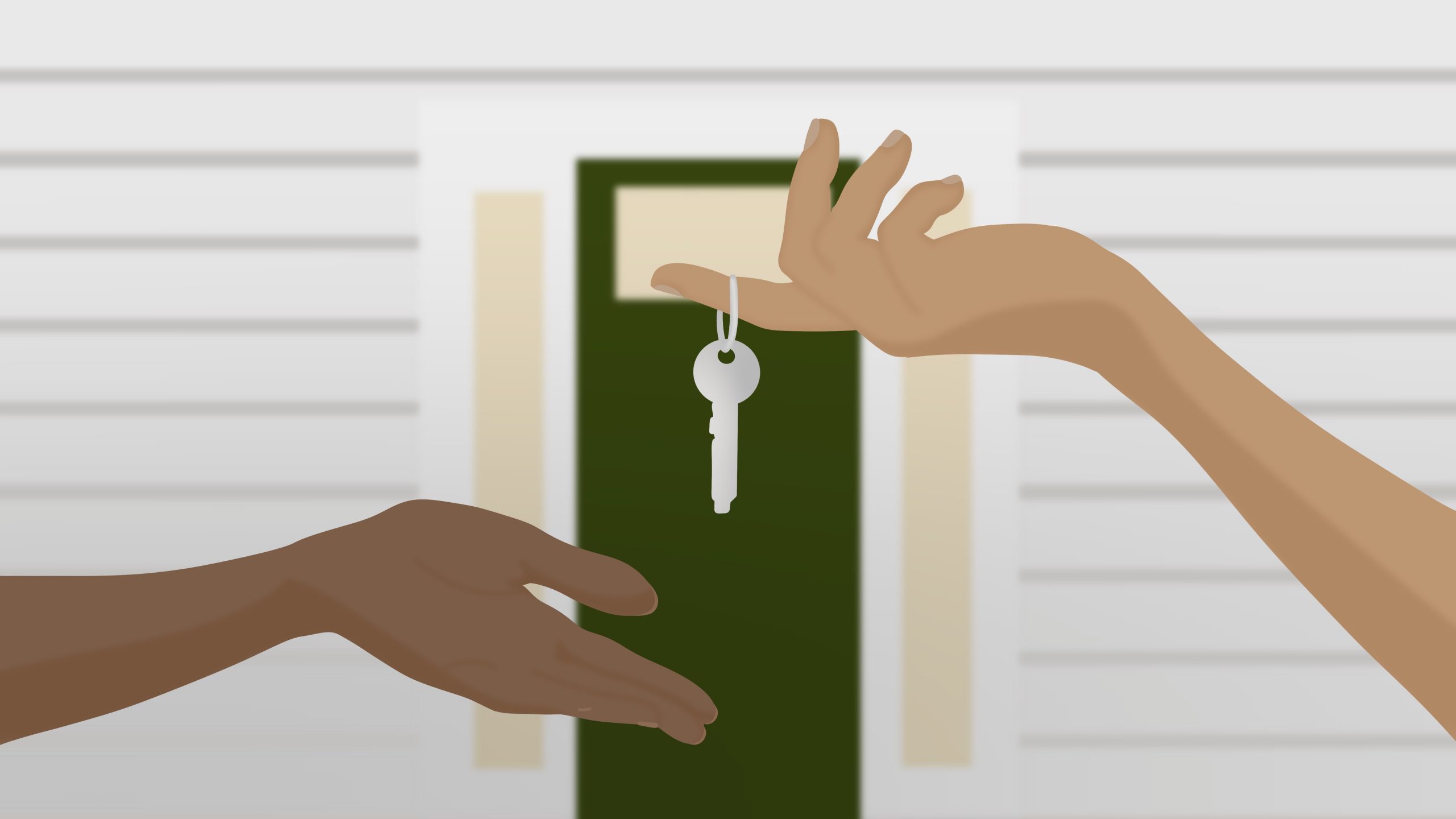 Chances are pretty good you have a story about a nightmarish situation involving a landlord and a tenant. Conflict over a rental arrangement is common, and the best way to avoid it is to sign an airtight lease agreement. However, many tenancies are “at will,” meaning there may be a verbal or written agreement between the landlord and tenant, but no formal lease specifies when the arrangement ends.

So what are some examples of at-will tenancies? How can this type of situation go wrong, and what rights do both parties possess when it does? These are important questions for landlords and tenants to consider. Understanding types of tenancies can help both parties navigate the complex web of laws and statutes that govern housing and make the right decisions for them.

Consider the following scenario: Bob owns a home and plans to move into it within a few months, but because of work commitments doesn’t know exactly when. His tenant’s lease is due to expire, and while he needs rent to cover the mortgage, he doesn’t want to go through the process of finding another tenant and signing another long-term lease. His son offers to stay in his home for discounted rent in the meantime.

Or this situation: Tracy’s friend ends a relationship and needs a place to stay for a few months while she figures out her next step. Tracy doesn’t mind her staying awhile. Six months later, the friend still hasn’t left.

A fixed, legally binding lease might seem onerous and unnecessary at the outset of either of these situations. The consequences of breaking a lease without a lawfully acceptable reason include penalties and costly lawsuits, so entering one can feel daunting. It’s easy to see how many people end up in at-will tenancies. At the same time, failing to sign a tenancy agreement can end in conflict or court. 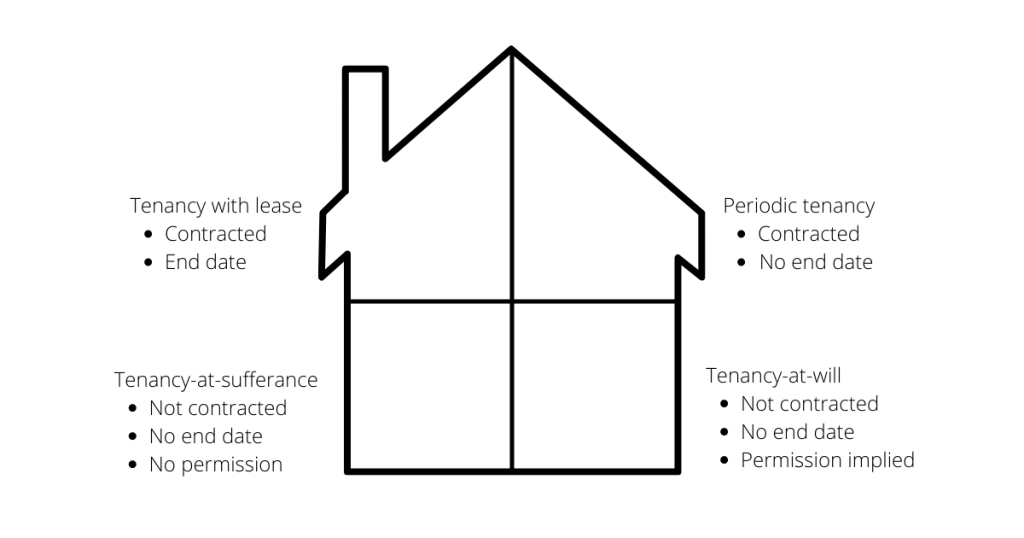 There are four broad tenancy categories:

The first is a tenancy for years, governed by a formal lease agreement. The lease applies to a fixed period and identifies the tenant’s move-out date. Though the lease might allow for the possibility of renewal, the tenancy ends when the agreement says it ends. This means the landlord doesn’t have to give the tenant special notice to move out.

Another type of tenancy is a periodic tenancy. This also involves a legally valid lease agreement but does not specify an end date. An example is a month-to-month tenancy. To terminate a periodic tenancy, notice must be at least equal to the length of the tenancy itself unless the parties agree, in writing, to other terms.

Then there’s a tenancy-at-sufferance. This is a fancy way of saying a lease ended or expired, and the tenant didn’t move out. Technically this makes the tenant a “holdover tenant,” or a tenant who continues to stay on a property despite not having the landlord’s express permission to do so. If the landlord continues to collect rent, however, the tenant’s right to remain is legally implied, and the tenant is entitled to 30 days’ notice before being evicted.

The fourth type of tenancy, which this post will discuss in detail, is the tenancy-at-will.

Case law defines a tenancy-at-will as a tenancy that lasts for an “indefinite period” of time. While there may be an agreement, even a written one, the agreement may not be legally valid or may be expired. A tenancy-at-will is not without rules; a strict, formalized contract doesn’t govern it.

At-will tenancies might involve people who are related or who know each other. An example is an adult child with a family who moves into a parent’s home temporarily. Another example is a property manager or onsite manager who renders services in exchange for a place to stay. Tenancy-at-will could even refer to a house-sitting arrangement.

The tenancy gets renewed every month unless either party indicates a desire to end it. Because no contract fixes the tenancy in time, the landlord or tenant can terminate the arrangement at their convenience.

If the landlord and tenant agreement is oral, most courts consider the tenancy a month-to-month tenancy. This means that despite the absence of a contract, a landlord must follow a specific set of rules to remove the tenant from the property. Because of rental laws’ complicated and variable nature, removing a tenant is not as simple as asking the tenant to move and then changing the locks if that doesn’t happen. 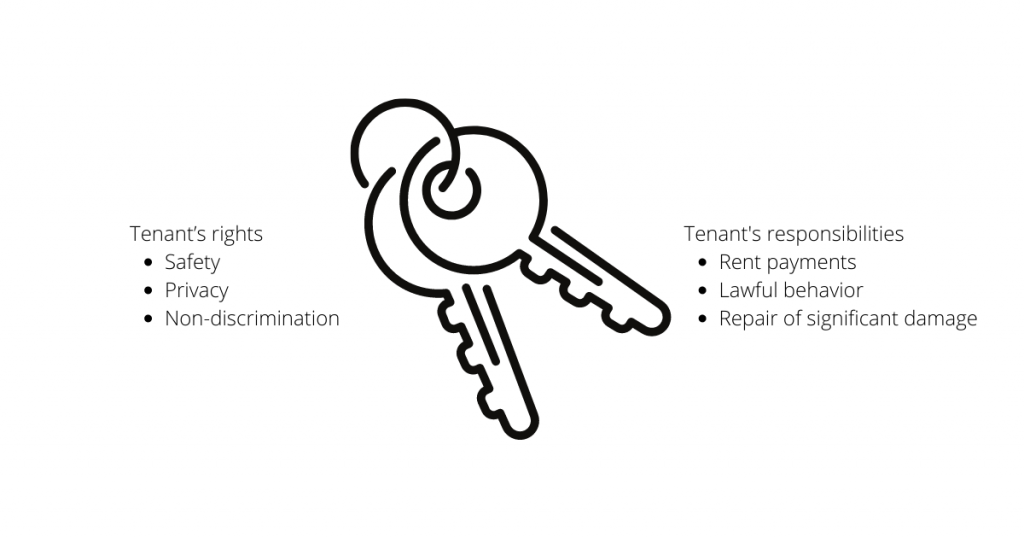 In almost every state, tenants have the right to safety and privacy. This is true whether or not there’s a signed lease agreement in place. If a landlord gives someone verbal or written permission to stay at a property, the person is considered a tenant with tenants’ rights.

This means that even in the absence of a contract, a landlord is required by law to provide and upkeep a safe, hygienic, and habitable environment for a tenant to occupy. The landlord must also give the tenant some notice before entering the premises, except in specific cases of emergency. (Rules on the amount of notice vary from state to state; click here for an overview of each state’s notice-to-enter rules.) Moreover, per the federal Fair Housing Act, a tenant cannot be refused tenancy or evicted on discriminatory grounds.

Whether or not there’s a formal lease in place, a tenant also has some legal obligations: to pay rent, for example, and repair damages to the property that go beyond normal wear and tear. (Check out this post to better understand the difference between damages and wear and tear.)

Laws vary widely between states, but these fundamental rights apply to all tenancy situations. It’s always a good idea for landlords and tenants to get familiar with their respective rights and what their state’s laws say about housing. Doing so can save time, money, and a lot of extra stress.

Let’s quickly clarify the difference between a tenant-at-will and a squatter. Neither has a rental contract. However, a landlord gave an at-will tenant permission to occupy the property. Squatters moved in without permission.

A squatter may, at some point, have had the landlord’s permission to occupy the premises but no longer does.

In most states, a landlord isn’t allowed to forcibly remove either tenant or a squatter from a property. Trying to remove someone from the place they’re living instead of leaving the act of removal in the hands of the authorities can land a landlord in trouble with the law.

When a Tenant Won’t Leave

So, what can a landlord do after inviting someone to live at a property without entering into a lease agreement and then realizing that person does not intend to leave?

The best action to take before any other is to try reasoning with the tenant. It’s wise to seek different ways to resolve a problem before it ends in court. Eviction costs time and money, so it’s best to avoid that path if possible.

However, sometimes a landlord and tenant don’t reach an agreement. In this case, the landlord can issue a notice to quit.

While requirements vary by state, the notice generally gives a tenant a timeframe to fix a problem, such as the non-payment of rent or moving out. If the tenant ignores the notice, the landlord has the authority to formally open an eviction proceeding in the local court.

Here’s where it gets interesting. If a fixed-term lease governs the tenancy, the landlord needs a legally valid reason to initiate an eviction. In most states, evicting a tenant engaging in illegal activity, such as prostitution or the distribution of illegal drugs, on the property or housing unauthorized persons or pets is legal. Failing to pay rent is also legal grounds for eviction.

But when the tenancy is “at will,” the landlord has to provide notice but doesn’t have to offer a reason for doing so. However, keep in mind that, even in a tenancy at will, a landlord is still not allowed to provide notice for reasons prohibited by the Federal Fair Housing Act.

At the same time, it’s also true that eviction can be a little bit more complicated when there’s no lease. Leases generally specify the timeframe in which the landlord must notify the tenant of impending legal action. If there’s no lease, the landlord is usually obligated to give a full 30 days’ notice. This, again, varies by state. In Utah, for example, the landlord has to give 15 days’ notice; in Delaware, the required timeframe is 60 days. (See this table for required timeframes in all 50 states.)

The landlord generally has more control over the timeframe and move-out date if a written contract lays the process out in black and white. In the absence of a lease, state law will determine the course of action. Exceptions to this rule include the landlord’s death or the sale or foreclosure of the property.

Pros and Cons of a Tenancy-at-will 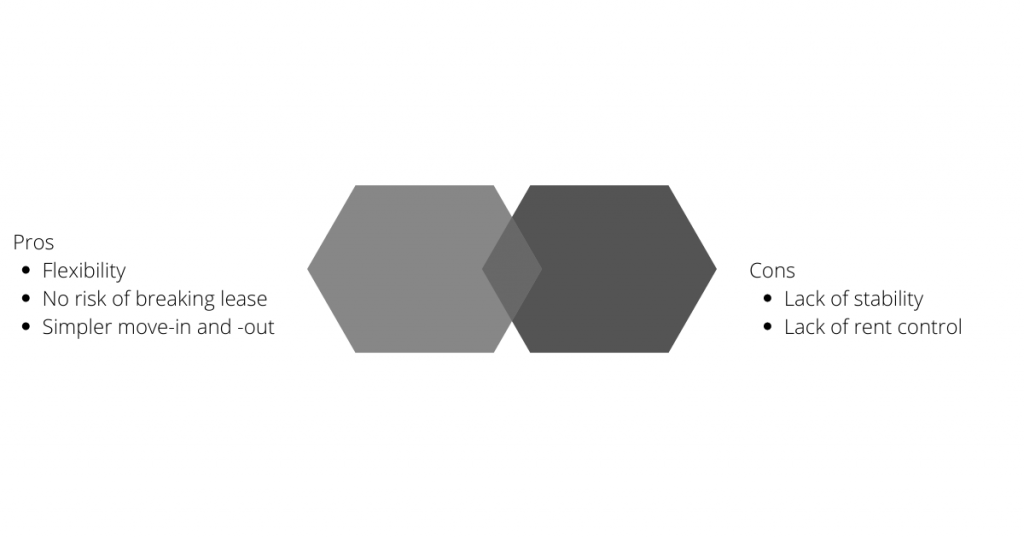 The primary advantage of a tenancy-at-will, of course, is flexibility. When either the landlord or tenant needs to be able to terminate an arrangement fairly quickly, a tenancy-at-will allows for that course of action. Another advantage is that the tenancy can continue while the property is on the market until it sells.

Flexibility, however, is the opposite of stability. Tenants seeking a guarantee that they’ll still have a place to live the following month and landlords who want certainty that a renter will continue to cover the mortgage for the foreseeable future may not be comfortable with a tenancy-at-will.

People who consider a tenancy-at-will too risky might prefer a lease agreement. A month-to-month agreement is an option that offers both flexibility and some measure of legal protection. Leases should include the terms of tenancy and the number of days of notice each party needs to give before ending the agreement. A simple form can distinguish between clarity and conflict, even if the rental arrangement is with a friend or family member. Check out our website for lease agreement templates that apply to various situations, as well as notices to quit and other tenancy-related forms.