Why Your Business Needs an NDA (Non-Disclosure Agreement)

A bit of healthy business competition doesn’t hurt. In fact, it usually drives individuals and companies to find new and creative ways to better themselves. But what if your direct competitor learned a few of your secrets, such as the schematics of the innovative product you were set to launch — and let their own version loose before you ever had the chance to make an announcement?

Some businesses have learned the hard way that trade secrets and certain processes need to be held close, which is why NDAs (non-disclosure agreements) are so prevalent in today’s workforce.

Get this: approximately one-third of the U.S. workforce is bound by an NDA!1

What is an NDA?

The above is only a small fraction of what could be considered sensitive and confidential information that, when obtained by others, could damage a company.

The Parties Involved in an NDA

Those partaking in NDAs are called:

In certain types of NDAs where two people or groups are sharing confidential information, each party may be both the disclosing and receiving party. Non-disclosure agreements are also called:

Why Does My Business Need an NDA?

If you’re the head of a company and you’re developing an idea that you want to keep from other ears and eyes, in an ideal world, you’d be the only one to know about it. But in the development stages, you’ll likely need engineers, marketing staff, programmers, and a slew of other personnel to get your idea to completion. While you won’t need to divulge information to every employee, those working on it directly can make a legal promise not to share these ideas with competitors or the general public, as the spread of information could sink the idea before it even materialized.

This is one small example of why businesses need NDAs. Any business that has proprietary information or any methods, designs, or anything else unique to their business can essentially lock that information away with an NDA.

There are two kinds of NDAs — unilateral and mutual.

Unilateral NDAs are more common and normally involve information that is shared with contractors or employees of companies. They are one-way agreements, which means that one person (the receiving party) is bound to the agreement.

Mutual NDAs are less common and involve two people that may come together with a business idea and both need to share sensitive information with each other. Mutual NDAs are also called bilateral or reciprocal NDAs, and in the contract, both parties agree to protect each other’s confidential information. 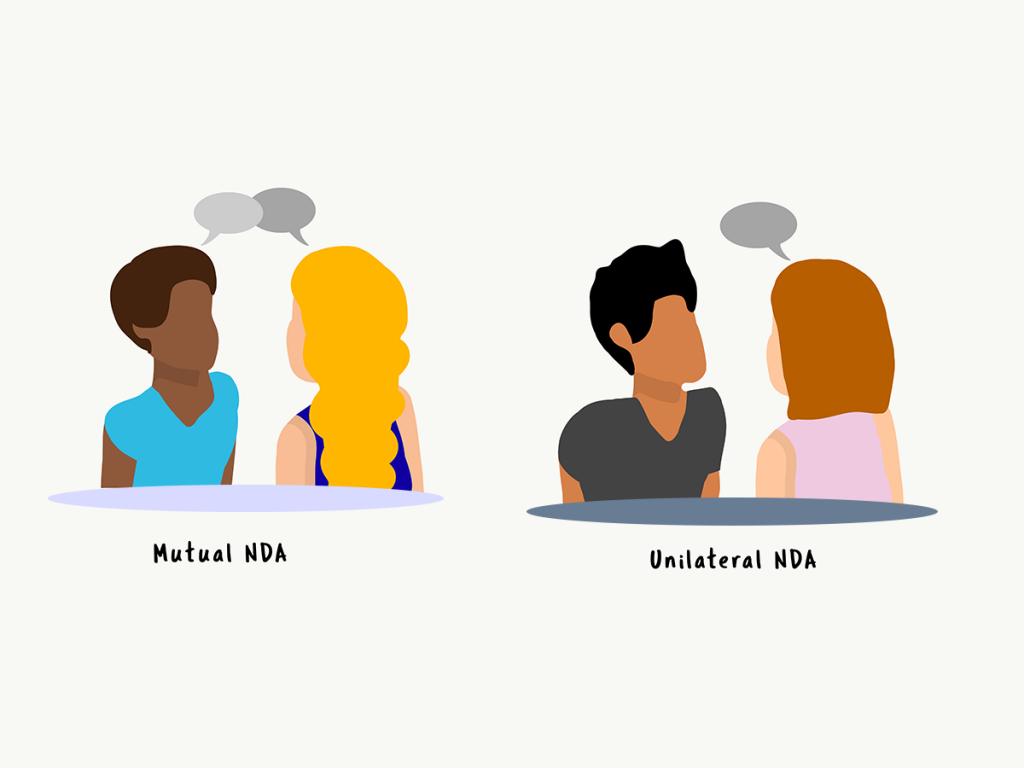 Key Functions of an NDA

The main point of an NDA is to prevent the spread of information to competitors, the public, and anyone else who can use this information to gain leverage on a person or business. Once information is released into the public by the disclosing party, the receiving party no longer has an obligation to keep the knowledge to themselves.

When to Use an NDA

There are a number of reasons and instances for using an NDA. Here are a few commonplace situations where NDAs are used:

What May Invalidate an NDA?

Not every non-disclosure agreement is airtight. If an NDA is missing critical information or doesn’t stay within lawful bounds, the document may be worth less than the ink printed upon it. Let’s review some important instances that may invalidate an NDA.

Video: A Visual Breakdown of NDAs