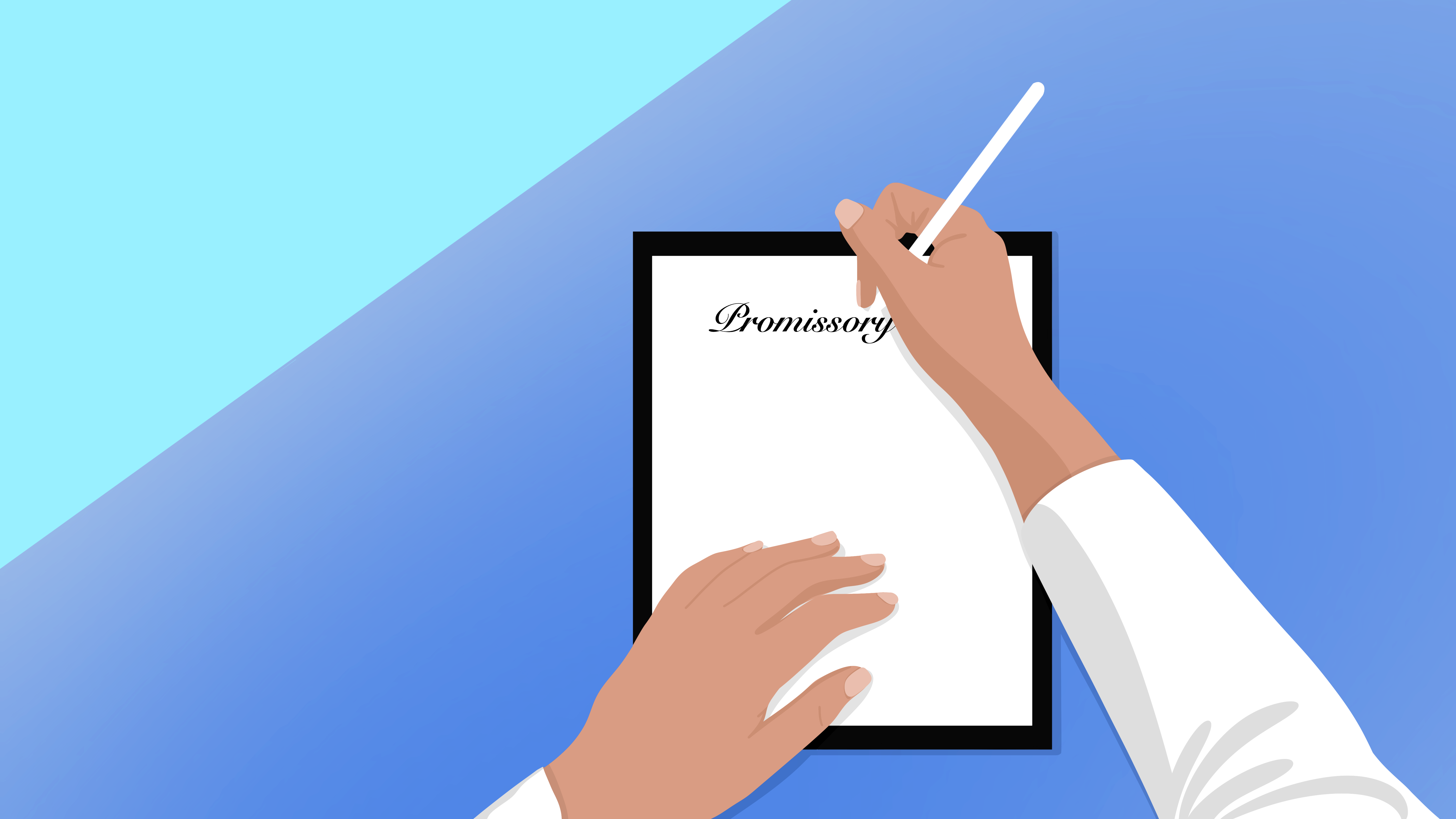 For those looking to borrow or lend money, a promissory note is an essential part of the arrangement that helps to ensure that the parties involved are on the same page. Also known as a “note payable,” it is a legally binding document that outlines the terms and conditions of the loan and holds the borrower accountable for repaying the borrowed amount.

A promissory note functions similarly to an IOU or a loan agreement—with some distinct differences in the clauses included and how it’s commonly used.

What is a Promissory Note?

A promissory note is simply a promise in writing, stating that the borrower will pay back the full amount of a loan under the lender’s terms of repayment.

It’s often used for home loans, car loans, student loans, personal or business loans, and for more informal arrangements between family or friends. While a loan agreement may provide a detailed breakdown of every aspect of the arrangement, promissory notes are generally simpler in nature with fewer formalities and requirements for what information must be included.

Is a Promissory Note a Contract?

Yes — if the document contains all the legally required terms. Once signed by the borrower, a promissory note becomes a formal contract that is legally binding and enforceable in a court of law.

What Makes a Promissory Note Invalid?

Conversely, a promissory note can be considered invalid if it does not contain all the legally required components, including the borrower’s signature. It can also be voided if the loan interest rate violates the state’s usury laws, which set a maximum cap on the interest rate that lenders are allowed to charge.

While all promissory notes share the same objective (which is to hold the borrower liable for the amount of a loan), they can vary in design and repayment methods depending on the type of the note.

A secured promissory note requires the borrower to provide a form of collateral in case of non-payment. This means that if the borrower fails to meet the terms of repayment, the lender has the right to seize the listed asset or property from the borrower.

While homes and cars are commonly used as collateral, it can be any other assets, rights, or interests in the borrower’s possession. Having a collateral on hand “secures” the lender’s stake in the arrangement and may result in a lower interest rate for the borrower.

On the other hand, an unsecured promissory note does not require collateral from the borrower as part of the contract. This means that if the borrower breaches the terms of the agreement, the lender may need to pursue legal action against the borrower to collect the amount owed.

Standard vs. Pay on Demand

While standard promissory notes outline a repayment timeline with a due date — in lump sum or in installments — a demand promissory note is more open-ended because it does not include specific payment terms about when the loan must be repaid. This means that the lender can serve a notice to the borrower at any time to repay the loan.

What to Include in a Promissory Note 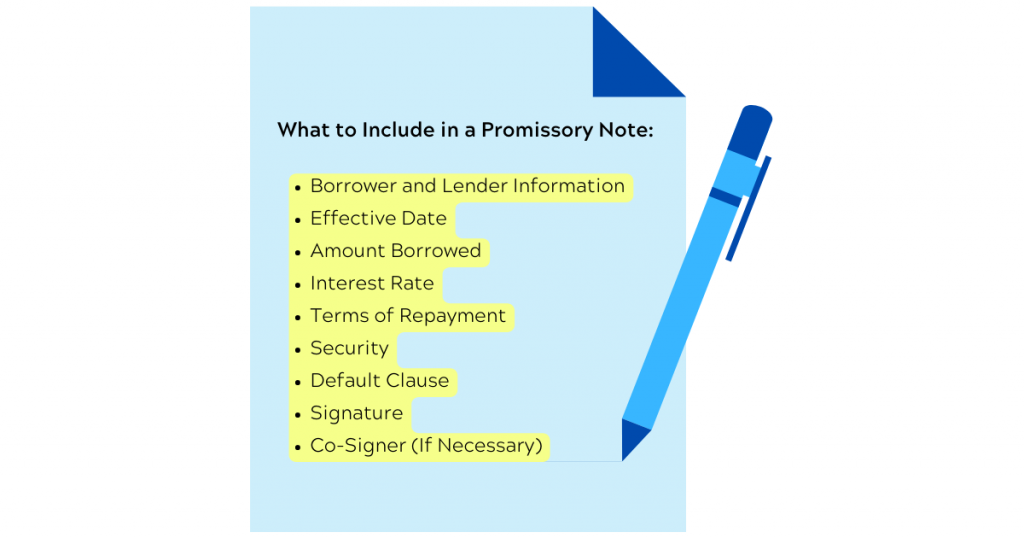 States have their own versions of the Uniform Commercial Code, which governs the requirements of what must be included in a promissory note. While minor differences may be evident from state to state, standard sections include:

This section identifies the two parties involved in the arrangement: the borrower and the lender. It provides their names and addresses.

It’s important to list the date of the promissory note becoming effective, as the repayment schedule can be relative to this date.

The face value of the amount borrowed, also known as the “principal,” should be clearly stated.

The interest rate is typically determined at the discretion of the lender, based on a number of factors: the borrower’s credit history, the size of the loan, whether security is being offered, and what state they’re in. The rate may be fixed or variable, meaning it can fluctuate overtime along with the market interest rate.

Every state has its own usury laws, which prohibit lenders from charging an excessive amount of interest on loans. Because it is governed and regulated by individual states, the allowed maximum interest rate may vary widely from one place to another. For example, California sets a cap at 10% for interest on personal loans, while Nevada’s allowed maximum rate is 36%.

Scroll to the bottom of the post to find a table with each state’s usury laws.

This section outlines how the borrowed money is to be repaid by the borrower. Methods can range from a lump sum payment, monthly installments, or due on demand. Payment due dates and the amount due should be specified in the promissory note.

It should be noted whether the borrower is offering collateral as a form of security for the lender. If this is the case, the asset or property in question should be named.

In the case that the borrower defaults on the loan, a promissory note typically includes clauses that state the lender’s rights in this scenario. This can include charging compound interest on an unpaid principal, acceleration of the final due date, and more.

The borrower must sign and date the promissory note in order to legally seal the terms and conditions of the loan. The lender may also sign the document, but unlike loan agreements, it is not required.

Different states have different requirements with regard to witnesses and notary acknowledgement. While promissory notes generally don’t need notarization to be enforceable in court, it is often recommended in order to avoid any question over the authenticity of the document.

If the lender determines that the borrower’s credit history is not satisfactory enough to qualify for the loan, it may be necessary to include a co-signer—someone who can be held financially liable for the borrowed amount and interest if the borrower is unable to meet the terms of the promissory note. 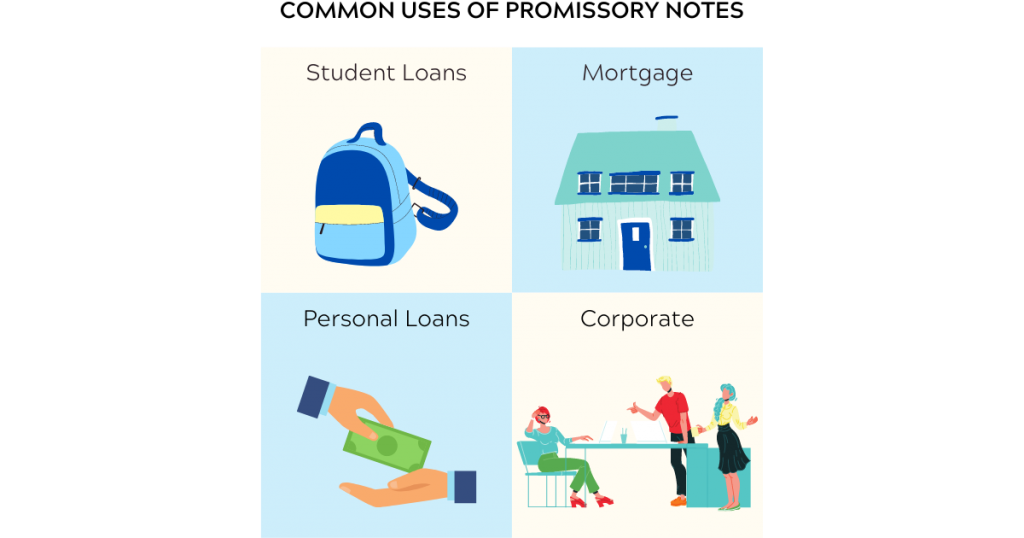 Due to its general flexibility and simplicity, promissory notes are utilized frequently across various sectors by institutions and individuals alike. Below are the most common uses:

A master promissory note (MPN) is used to borrow federal student loans for a period of up to 10 years. An MPN differs from a standard promissory note in that it allows a borrower to take out multiple loans over various academic years under the same terms and conditions as set forth in the original promissory note. By signing the MPN, the student is promising to repay the cumulative principal amount plus accrued interest and fees to the Department of Education.

For private student loans, the master promissory note does not apply.

A mortgage promissory note documents a loan that is used to finance the purchase of a home. Commonly referred to as a “mortgage note,” it acts as a legally binding promise from the borrower to repay the loan over the predetermined time span, typically ranging from 15 to 30 years.

Until the debt is paid in full, the lender typically holds the property as collateral. This means that in the case of missed or late payments, the lender is legally allowed to seize the home from the borrower and sell it—a process known as foreclosure.

Also, because a promissory note is a negotiable instrument, it is not uncommon for a mortgage lender to sell the note to a third party, such as a bank or a private entity. In such a case, all the terms and conditions of the mortgage contract would stay intact, other than a change in the legal holder of the note and who the repayment should be made to.

A personal loan is typically a lump-sum amount borrowed from banks, credit unions, online lending platforms, or friends and family. Unlike the master promissory note or the mortgage note, a personal loan can be used for any purpose.

Promissory notes are commonly used for personal loans because the borrowed amount is generally smaller than other types of loans. And while institutional lenders typically set up recurring payments over the span of multiple years, lenders who have a more personal or informal relationship with the borrower may opt for a demand promissory note, which allows more flexibility in the repayment arrangement.

When a business is officially incorporated, it is legally allowed to take out loans without personal liability to the people running the company. This means that on the promissory note, the company’s name would appear as the “borrower,” and an authorized person from the company would sign the note on its behalf. This method is commonly used in business to acquire short-term credit or financing from suppliers, financial institutions, and even individual investors.

A corporate promissory note is legally considered a “security” and must be registered with the SEC and the state securities regulator unless otherwise exempted.